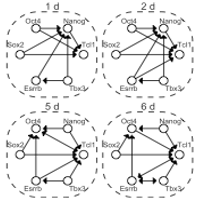 Inferring time-varying networks is important to understand the development and evolution of interactions over time. However, the vast majority of currently used models assume direct measurements of node states, which are often difficult to obtain, especially in fields like cell biology, where perturbation experiments often only provide indirect information of network structure. Here we propose hidden Markov nested effects models (HM-NEMs) to model the evolving network by a Markov chain on a state space of signalling networks, which are derived from nested effects models (NEMs) of indirect perturbation data. To infer the hidden network evolution and unknown parameter, a Gibbs sampler is developed, in which sampling network structure is facilitated by a novel structural Metropolis–Hastings algorithm. We demonstrate the potential of HM-NEMs by simulations on synthetic time-series perturbation data. We also show the applicability of HM-NEMs in two real biological case studies, in one capturing dynamic crosstalk during the progression of neutrophil polarisation, and in the other inferring an evolving network underlying early differentiation of mouse embryonic stem cells.